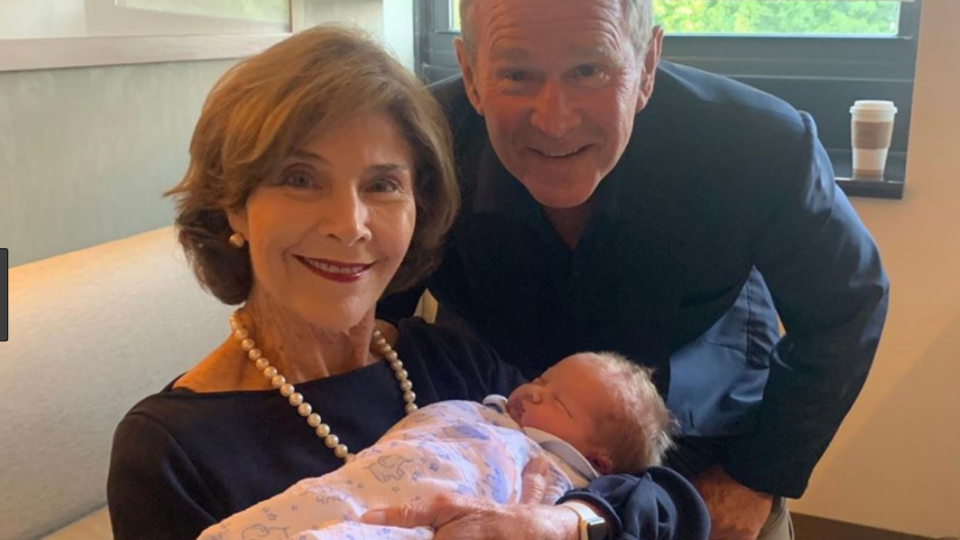 (CBS News)– Former President George W. Bush is excited about the birth of his new grandchild — his first grandson. The former president posted a photo with his growing brood, including his two granddaughters, Mila and Poppy.

“[Laura] and I are thrilled to welcome Henry Harold Hager to our family,” Mr. Bush posted on Instagram. “We are happy for the proud parents, [Jenna Bush Hager] and Henry. And pleased that Mila and Poppy have a little brother to love. We thank God that mom and baby are healthy and we look forward to many years of loving the boy known as Hal.”

Jenna Bush Hager, a Today Show anchor, has chosen family names for all three of her children. The newest addition, whose full name is Henry Harold Hager, is named after her husband, Henry Hager, and her maternal grandfather, Harold Welch.

While Harold honors Former First lady Laura Bush’s lineage, Jenna has chosen names to honor both sides of her family. “Poppy” comes from the presidential side.

Former President Bush and his wife, Laura, now have three grandkids to run after on his ranch in Texas. His other daughter, Barbara — who is named after his mother, the former first lady — got married last year.

FNFF Mascot of the Week: Robertsdale

Hurricane Sally: Where to get food along the Alabama Gulf Coast

What’s the future of Prichard Stadium?

Free transportation offered to libraries to fill out Census

The Doctor Is In: Genetic Counseling & Genetic Testing

Park officials: Goal is to reopen shortened Gulf State Pier until it can be completely fixed

Fort Morgan, stronger than the storm

Families forced out of Baldwin County apartments due to storm damage

DeSantis lifts restaurant, bar restrictions, but not all establishments on board

WATCH: Blue Angels fly over Pensacola in support of those impacted by Hurricane Sally

Trump shifts focus to Pennsylvania to shore up reelection

The president will travel to the state for the second time in a week on Saturday, hoping to attract the same rural and white working-class voters who delivered him a narrow victory here in 2016. The in-person touch, in what may become the most important battleground on the map, complements an aggressive get-out-the-vote operation that has been working for four years to find new voters by knocking on doors in competitive neighborhoods.

WASHINGTON (AP) — President Donald Trump is expected to announce Saturday that he is nominating Judge Amy Coney Barrett to the Supreme Court as he aims to put a historic conservative stamp on the high court just weeks before the election.

Trump said Friday he had made up his mind and it was “very exciting,” without giving away the name, aiming to maintain some suspense around his personal announcement. But the White House indicated to congressional Republicans and outside allies that the pick was Barrett.

Mobile County has established a Hurricane Sally Removal and Reporting Survey on its website at www.mobilecountyal.gov. Look for the link to Hurricane Sally Newsroom for up-to-date information on the debris removal, FEMA, and frequently asked questions.

FNFF Mascot of the Week: Robertsdale

Park officials: Goal is to reopen shortened Gulf State Pier until it can be completely fixed

Hurricane Sally: Where to get food along the Alabama Gulf Coast

What’s the future of Prichard Stadium?